You Are what you Eat

We live in a society which is quite literally OBSESSED with the world halal, and with associating that word with meat alone. There’s a lot of emphasis placed on eating Halal but there​ is far less emphasis on whether meat is Tayyib, which is just as important and deeply rooted in Islamic principles. But what about Tayyib?

The word tayyib is from taa-ya-ba (ط ي ب) and it literally means to be good, pleasant, agreeable, lawful. The word ‘tayyib’ itself means to be good, clean, wholesome, gentle, excellent, fair and lawful. From these meanings we get the general meaning for tayyib of anything that is good and pure. So, with that in mind, halal ensures the animal is slaughtered in the correct way and is permissible for us to eat, while Tayyib ensures the food we eat is healthy, nutritious and good for us. It is important to know that the animals we consume are healthy, free of disease, hormones, antibiotics, and chemicals at the time of slaughter. In fact, even during slaughter, we as Muslims are not allowed to inflict unnecessary pain on the animal and the animal should be slaughtered away from the sight and hearing of the other animals.

How important is it that we focus on tayyib meat? Allah  says in the Quran:
​
"يَا أَيُّهَا النَّاسُ كُلُواْ مِمَّا فِي الأَرْضِ حَلاَلاً طَيِّباً وَلاَ تَتَّبِعُواْ خُطُوَاتِ الشَّيْطَانِ إِنَّهُ لَكُمْ عَدُوٌّ مُّبِينٌ"
​
"O ye people! Eat of what is on earth, Halal and Tayyib and do not follow the footsteps of the evil one, for he is to you an avowed enemy." (Surat al-Baqarah aya 168 // 2:168)

Allah swt., when referring to food always says the worlds halal and tayyib together in the Qur’an, never halal by itself. This begs the question, why have we decided to ignore half the criteria? We do a good job of knowing what is halal and what isn’t, but I wonder why we’re not as diligent when it comes to the tayyib. From this Qur’anic passage, we know that tayyib meat is and should be considered just carefully as halal meat.

I have begun to notice that whilst the obsession with halal meat is ever growing, millennial Muslims are taking an interest beyond whether their meat has simply been slaughtered in a halal manner, such as whether their meat is being obtained from an animal that’s been looked after, treated decently and which has lived a happy life. Muslim’s nowadays want meat that’s of excellent quality, ethically sourced and sustainable. Questions like: ‘What breed of animal is it?, ‘How were they slaughtered?’ and ‘What they were fed?’ are becoming more frequently asked in Muslim-run restaurants, and these questions also extend to the other ingredients used to make up the dishes on restaurant menus.

The Qur’an reveals that all living animals are sentient beings, just as human beings are. “There is not an animal on earth, nor a bird that flies on its wings – but they are communities like you.” (Qur’an, 6:38) With that in mind, why is it that we as Muslims, are not on the forefront of the campaign for animal rights? Especially when the Qur’an teaches us that we are khalifs (guardians) of the earth, and the animals on it, therefore have a responsibility to ensure their well-being is to the standard that Allah swt. expects.

the growing demand for these ethically sourced meats, and are offering superior quality, that are both Halal and Tayyib to Millennial Muslims.

So why don’t more of us consume tayyib meat? In my opinion it’s down to three things: lack of awareness, convenience, and cost. For some reason, there is less emphasis and recognition on the world tayyib in our communities. We as Muslims need to start to highlight and promote the benefits and necessities around tayyib meat. With that being said, more Muslims are starting to care about where their meat comes from and how it is slaughtered. I should point out here that although the method of slaughter is a whole different issue/topic, I do believe that because people are starting to care more about method of slaughter (i.e. the halal certification of their meat, avoiding machine slaughter etc.) more Muslims are automatically turning to tayyib meat (not necessarily understanding what that entails), as tayyib produce is also usually hand-slaughtered and therefore fully halal.

The second issue is convenience. There’s inevitable tension between Muslims desire for convenience and the quest for spiritual gains. Unfortunately, convenience usually wins. Poor quality halal meat is all too easy to find. Just take a trip down to your local Halal meat market.

Now there is this third issue on COST. Naturally, you get what you pay for. Price is a major consideration for Muslims, at the expense of meat quality. Food blogger Haloodie Foodie rightly pointed out, that Muslims today don’t even know what good quality meat tastes like. They go buy their cheap, intensely farmed produce, cover it in a load of spices, and fail to actually taste their protein source for what it is.

Nobody can disagree that Britain’s Muslims eat a LOT of meat just like the rest of the population. UK studies have shown that despite making up just 4.6% of the population, British Muslim's consume 20% of this country’s lamb, and according to the Muslim Council of Britain, the halal food market in the UK is worth £1bn. With the demand of halal meat being so high, it’s no wonder that Muslims today are so used to paying cheap prices for their meat. This comes at another ‘price’, as intensive farming in the halal meat industry quite obviously compromises the welfare of  livestock. This meat that we have such easy access to, is from an animal that was most likely distressed, caged, and reared in cramped conditions. In short, in order to have access to and eat tayyib meat, we would need to reduce our meat consumption, because currently, the only way our demand for meat can be met is through intensive farming methods.

If more people bought organic halal meat, the raised price would deter Muslims from eating so much of it. Likewise, the price of halal organic meat could also eventually fall, making organic meat the ‘norm’ and making it more affordable for a broader spectrum of Muslims.

Just as a relevant side-note, eating lots of meat is anything but Islamic. Although I have always loved and appreciated meat, I have grown up in a vegetarian Hindu household, where I would consume meat once or twice a week at most. following marriage, my body was physically shocked at the amount of meat Muslims consumed.

According to Hamza Yusuf, historically, Muslims ate so little meat they were almost vegetarian. In fact, meat would only be on the menu once a week if Muslim's were wealthy, and maybe a few times a year if they were poor. The prophet Muhammad (pbuh) was also not an advocate of daily meat-eating. His habitual diet actually consisted of favorite foods like dates, water, vinegar, honey, yogurt, barley bread, and grapes. Meat was available only occasionally, and when it was he favored sheep’s shoulder/foreleg.

Further to this, the second Caliph Umar ibn al Khattaab notably stated: “beware of meat, for it is addictive like alcohol.”  It seems that 1,500 years later, these concerns are being far from heeded. Further to this, Umar, during his khilafa, also prohibited people from eating meat two days in a row. He only allowed them to eat [it] every other day. Once, he saw one man eating meat every day, and he said to him, ‘Every time you get hungry you go out and buy meat? Right? In other words, every time your nafs wants meat, you go out and buy it?’ He said, ‘Yeah, Amir al-Mumineen, ana qaram,’ which in Arabic, ‘qaram’ means ‘I love meat’—he’s a carnivore, he loves meat. And Sayyidina Umar said, ‘It would be better for you to roll up your tummy a little bit so that other people can eat.”

Besides the Islamic reason to not eat meat regularly, there are also scientific reasons as to why they ate meat occasionally: although meat is a beneficial and permissible food, it is harmful when eaten regularly. Regular meat intake coincides with increased disease: heart disease, cancer, and obesity. In fact, those that eat meat a few times a week/month, have lower rates of heart disease and cancer, weigh 15% less and live about 3.6 years longer. Vegetarians weigh about 17 pounds less, live about 5 years longer, and have about 30% less cancer risk. SubhanAllah, it’s amazing when science proves something the prophet taught us to do 1400 years ago, and it goes to shows how science is playing catch up to religion.

This over consumption of meat within the Muslim community today is purely cultural, and I believe our selfish desires have compromised the permissibly of our means according to Islam. Why is this point relevant? We have an opportunity here, to cut down on eating cheap quality halal meat, eat less meat overall in line with the sunnah, and on the rare occasion that we do eat meat, to eat meat that is tayyib, healthier, and of a higher quality. I know what you’re thinking it’s a flawless plan just waiting to be executed, it just requires a little more effort from us muzlamics.

To conclude, that old saying ‘You are what you eat’ rings very true. We are so fixated as Muslims, on how our animals die rather than on how they live. The reality is, the latter is just as important as the former. From experience, the taste of meat from livestock which has been ethically reared is far superior and is of a much higher quality than the halal meat which is available through intensive farming. If we want to eat better and live healthily then the decision lies with us. Let’s try and be more conscious with regard to the importance of tayyib AND halal meat. The future is in our hands.
​
Source: https://thehalalplug.com/2018/05/31/you-are-what-you-eat-halal-tayyib/
Read more about the diet of our beloved prophet Mohammed (PBUH) > 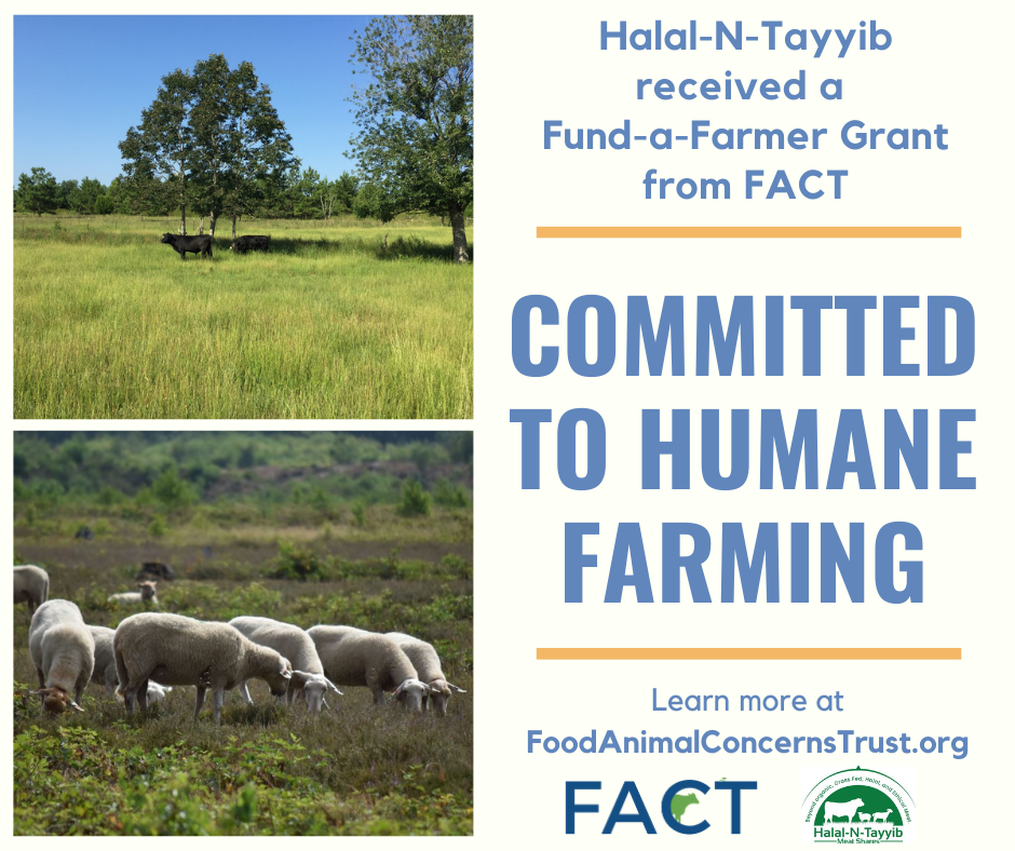