The Diet of the Prophet Muhammad (PBUH)

“Oh, you people, eat from the earth what is halal and tayyib, and follow not the footsteps of the Shaytan …” (Surat al-Baqarah 2:168) 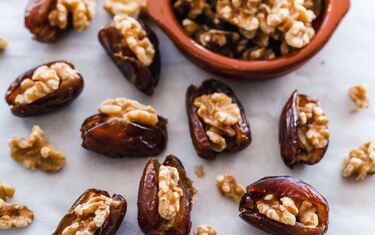 The Prophet Muhammad pbuh was a Flexitarian he prohibited eating meat every day. It was noted that sometimes smoke would not be seen from the Prophet's house for a period of two lunar cycles at a time, when asked what he was eating instead of meat he would say Dates and Water.

Islam does not ban the consumption of meat, but the Prophet pbuh said it was “food of the Kings”, which implies meat consumption should be treated as a luxury and not the main part of a dish. Also Islam does not require you to eat meat. One of the Sahaba chose not to eat meat for personal reasons which the Prophet pbuh accepted. But you should not give up meat as part of ibadah nor is it a requirement to eat meat to become a Muslim.(2)

Meat was only consumed on special occasions and treated as a luxury during prophetic times. Even on a Friday or when he had guests if meat was not available the Prophet pbuh would have squash/ pumpkin or dates.
​
The Quran states we should eat and drink well but not be excessive. The Prophet ate with the stomach In 3rd’s, he did not gauge until feeling ill, it is sunnah to eat within portion.

“Eat and drink but do not be excessive for God does not love those who are excessive (in what they do)” (Quran 7:31)

The Prophet (peace and blessings of Allah be upon him) said: "The son of Adam does not fill any vessel worse than his stomach. It is sufficient for the son of Adam to eat a few mouthfuls, to keep him going. If he must do that (fill his stomach), then let him fill one third with food, one third with drink and one third with air.” Narrated by al-Tirmidhi (2380); classed as saheeh by al-Albaani in al-Silsilah al-Saheehah (2265).
​
The Prophet pbuh was not demanding when it came to food, he ate whatever was available at the time. In modern times we sometimes have three course meals or cook various dishes of meat, fish and vegetables. It was said that the Prophet pbuh didn’t like to “mix” food he preferred to keep his meals simple. (3)

Now with modern times of importing food from around the world we have become more and more demanding and spoilt with the food choices we have.

The human race is becoming addicted to poor quality meat, it has been engrained in our daily lives to eat meat. People are becoming more and more unhealthy, dragged down by disease such as diabetes or cancers because of the increased consumption of meat and processed foods. This is down to farming practices changing to produce more and more to keep up with the greed and addiction of the consumer. It is part of Islam to eat fresh, home- grown, clean food. Food which is Tayyib. (Wholesome, pure, clean, nutritious)

“Oh, you people, eat from the earth what is halal and tayyib, and follow not the footsteps of the Shaytan …” (Surat al-Baqarah 2:168) (5)

So what did the Prophet eat aside from meat:

The rest of the Prophets diet consisted of Dates, Figs, Grapes, Milk, Honey, Olive Oil, Vinegar, Watermelon, Barley, Pumpkin, squash and any other vegetables that were available as narrated in the hadith below.

Allah's Messenger (PBUH) said, "He who eats seven 'Ajwa dates every morning, will not be affected by poison or magic on the day he eats them." (Bukhari 5445)

“We give you drink from what is in their bellies - between excretion and blood - pure milk, palatable to drinkers.” (Quran 16:66)

The Prophet (PBUH) said, "Healing is in three things: cupping, a gulp of honey or cauterization.” (Bukhari 5681)

As Muslims it is sunnah for us to incorporate the eating habits of the Prophet into our daily lives, for some this is a complete lifestyle change but our reward may be increased by simply trying to have a more balanced diet.

Source: https://www.hawauk-online.com/articles/the-diet-of-the-prophet-muhammad-pbuh
For support, email hello@Halal-N-TayyibMeatShares.com
Questions? Visit our FAQs here, call or send a text to (478) 461-7884 (8 AM - 8 PM EST, Mon - Sun)
© 2019 Halal-N-Tayyib Meat Shares. All Rights Reserved. Privacy Policy   I   Terms of Use   I  Sitemap